MY HOME IS ON THE COVER of Design Anthology Magazine!!!!!!

Over the holidays, while I was eating my weight in French cheeses and Hungarian goulash, my best bestie was taking up residence in my home here in Hong Kong.  I was thrilled to offer my 236 square-foot (22 square-meter) studio to my friend while she passed through town, but then reality sunk in.  She’s not only from America, she’s from Texas!  [Side note: They mean it when they say everything is bigger in Texas.]  But I figured if I could adjust my Texas-sized standards to live in 236 square-feet everyday, she certainly could adjust for a week!  In the end, everything worked out perfect.  However, afterwards she still couldn’t exactly wrap her brain around how I manage life in such a small space.  Everyday.

I sometimes forget just how abnormal living conditions are in Hong Kong.  According to a Forbes 2014 report, Hong Kong ranked the 3rd most expensive city in the world to live in.  Interestedly, Tokyo ranked #7, London #12 and New York City #16.  After three years of continually downsizing (it’s a daily thing…), I’ve learned simplifying isn’t simple.  It’s hard.  But also rewarding and liberating.  I never thought consuming less could provide such happiness.

Hong Kong-based French designer, Peggy Bels, completely gutted the original space to create this unique open floor plan.  For a city where most flats are full of chopped up, tiny unusable rooms, this space was love at first sight and very unusual for local standards.  I love the use of white with varying shades and textures of charcoal.  This simple approach is easy on the eye, causing the space to feel larger than it is.

I’ll admit after living here 6 months, I’ve had my moments of frustration.  I’ve learned things happen much slower and a lot less efficient here, than in the states.  I’ve also learned common sense is not that common.  Wood floors that someone forgot to seal, a hot water heater that’s too small to adequately supply enough water pressure for the rainfall shower head, cabinet doors and shelving that weren’t installed securely (causing for a few messy crashes…), a sink faucet that protrudes beyond the actual sink basin, and don’t get me started on the washing machine.  It’s been interesting.

But, I also have to admit, Peggy Bels has been great at getting things corrected.  Eventually.  No matter how frustrating the process has been, at the end of each day, once the lights are dimmed and a cocktail finds its way to my hand, I still love my home.

I have made some changes over the last few months and I will post an update later.  But for now, let’s take a look at how the designer envisioned life in this 236 square-foot studio.  You can also read more about my studio here, which is currently featured on the cover of Design Anthology Magazine. 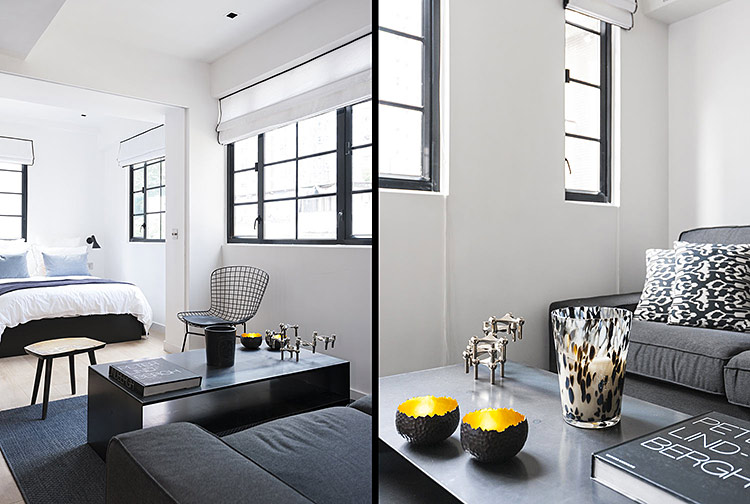 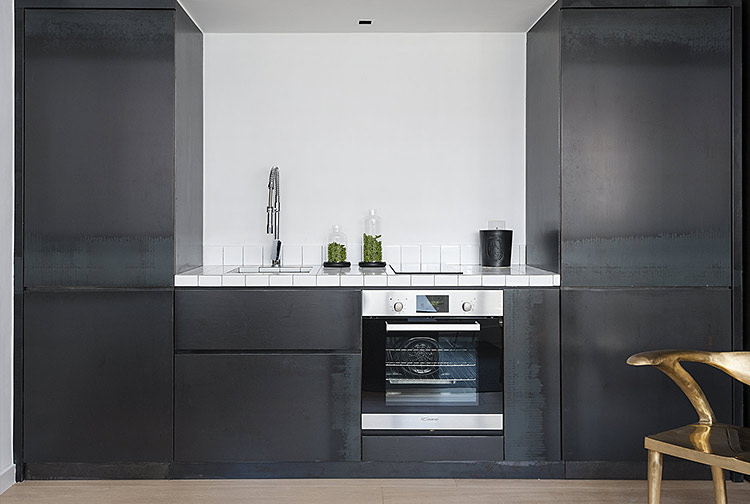